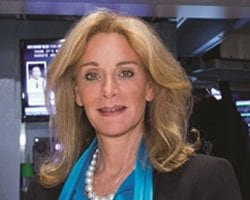 Driven by the need to empower individual investors, Kim Githler founded MoneyShow in 1981. Over the course of 38 years, she has educated millions of investors, traders, and financial advisors. In 2014, Ms. Githler was honored by the New York Stock Exchange for educating investors when she was invited to ring the closing bell. Not only has she had a major impact on millions of investors around the world but she has also impacted thousands of expert educators and organizations in the financial industry. Ms. Githler works tirelessly to raise awareness for financial education and was recently named one of the 500 most influential people in Florida by Florida Trend magazine and one of the top 100 most influential libertarians by Newsmax. She was also the first woman to sit on SunTrust of Sarasota's advisory board. Her passion has always been conscious capitalism and her mantra is "Knowledge is Power," because of the fundamental belief that through knowledge one can make a significant impact on society. Throughout her career she has been an entrepreneur having created a number of enterprises for her family and launching those in the financial industry including the first conference for Dow Jones' Investment Advisor Publication. She was also one of the co-founders of Financial Advisor Magazine and was instrumental in the launch of ETF.com's conferences for financial advisors and the education of ETF's.