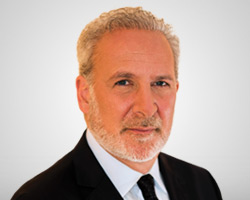 Peter Schiff is the chief economist and global strategist of Euro Pacific Capital, a division of Alliance Global Partners, a Registered Investment Adviser and a full service broker/dealer. He is one of the few widely known economists and investment professionals to have spoken about the financial crisis before it began. As a result of his commentary on the US economy, Mr. Schiff is becoming increasingly more renowned. He is a widely followed opponent of debt-fueled growth policies and known for his advocacy for emerging market and commodity-focused investments in countries with positive fiscal characteristics. Mr. Schiff has been quoted hundreds of times in leading news outlets around the world, and he regularly appears on business news channels worldwide. His best-selling book, "Crash Proof: How to Profit from the Coming Economic Collapse" was published in February of 2007. Mr. Schiff's fifth book, The Real Crash (Fully Revised and Updated): America's Coming Bankruptcy, was released in April of 2014.